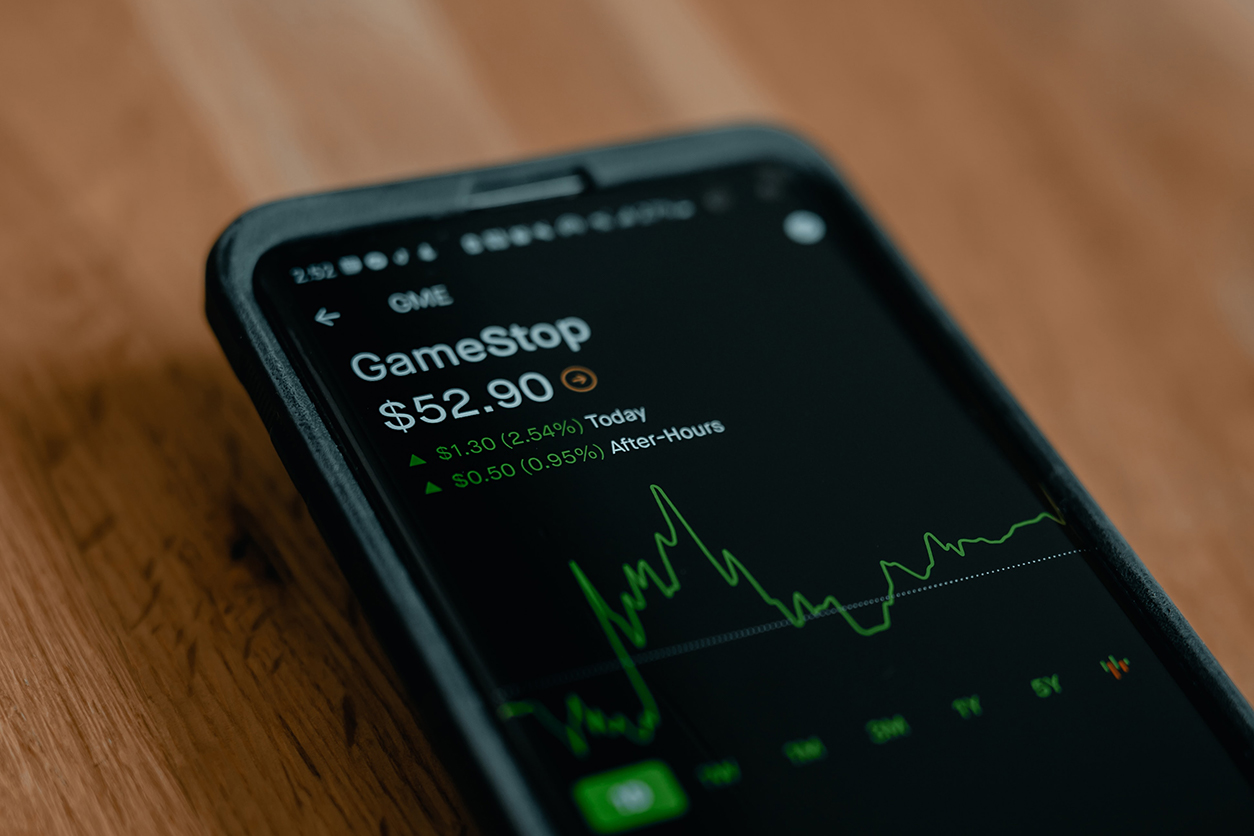 “Men, it has been well said, think in herds; it will be seen that they go mad in herds, while they only recover their senses slowly, and one by one.” –Charles Mackay

Extraordinary Popular Delusions and the Madness of Crowds.

That’s a mouthful. And, actually, it’s a book.

The author, Charles Mackay, researched some of the greatest financial bubbles or manias of all time. As a researcher, Mackay wanted to understand the psychology of crowd behavior on investments and economies.

The book was written in 1842, but was cited routinely during the internet bubble of the late 90’s and the banking/mortgage crisis of 2007-2008.

One can look at some of the behavior today and wonder if Mackay would add an additional chapter if he were still alive.

Is there herd behavior amongst us in 2021? Let’s consider the following…

Did you hear about the recent Gamestop saga where small traders bid up stock to unprecedented levels so the hedge funds who shorted the stock were wiped out?

Tesla’s market value today is worth more than the largest ten auto manufacturers combined! Does that make sense on any level?

And then there’s Nikola, another electric vehicle maker — and I use that term loosely — whose stock became more valuable than Ford at one point in 2020. Nikola not only doesn’t have revenues, it apparently doesn’t have a working truck, either! They ran a promotional ad of its truck traveling in the desert — a semi with its payload moving along at quite a rapid pace — and apparently, it wasn’t actually moving on its own. They rolled it downhill to give it the appearance of moving. In a statement, the company said it didn’t intend to mislead anyone. It certainly didn’t mean to imply that the truck was running. The CEO has since resigned amid fraud allegations and multiple federal investigations. After all that, the stock still has a $3B valuation today! Even if the company has a unique technology, the valuation seems absurd.

Small investors are jumping in with vigor, enamored with the hopes of great gains. Websites and apps mostly geared toward millennials, but open to all, promote the idea of easy trading with cartoonish ads telling us how easy and fun it is to make great gains. There’s no hint of disclosure or warning of the risks that trading involves.

Herd behavior is alive and well in 2021.

Online trading app Robinhood (who was involved in the Gamestop hubbub mentioned above) brands itself as democratizing investing. Bringing tools to the small investor. “We’re giving you the tools to trade like the big boys. Gosh, we’re such good guys.” It seems, though, that Robinhood forgot to tell its legion of fans that they’re not really the client. The hedge funds are (the hedge funds they sell order flow to). Robinhood allows their hedge fund clients to see what’s gonna be bought and sold before the orders are placed. The hedge funds can then buy or sell in front of the Robinhood investors, thereby profiting from the difference in price.

In fact, selling order flow is what Robinhood’s business model is predicated on. Nearly 100% of their revenues derive from selling this information. But did they disclose that to users? Earlier this year their platform went wild when small-time traders decided to go on a Gamestop buying spree (and stick it to the hedge funds). Robinhood had to shut down orders for fear of being bankrupted, biting the very hand that feeds them.

Robinhood has been sued and pilloried in the press, but they probably didn’t do anything illegal, according to most legal scholars. However, the law is somewhat vague and riddled with loopholes. Loopholes big enough that most large firms could drive or push a semi-truck through.

These examples may ring familiar if you remember the internet bubble of the late 90’s. Idea and concept stocks garnering unbelievable valuations in the absence of profits, or in some cases even sales…

The bubble of the late 90’s touched on good companies as well. Coca-Cola, the bluest of the blue chips, achieved a valuation of 55 times earnings. For reference, the average for the US stock market is around 15 times earnings. Investors were so gung-ho, they were willing to pay almost 4 times the normal price for Coke shares.

So, how’d that work out for them?

Over the next 20 years, the exuberant Coke investor of 1998 made a little over 3% annually while revenues and profits more than doubled. So, earnings more than doubled and then they made close to nothing over 20 years. We’ve said it before — how much you pay matters, a lot. It wasn’t that Coke was a bad company. It was just a bad investment (at the time). If they would have cashed out at the end of 2010, it would have been worse. They would have made nothing for their decade of vigilance.

I don’t believe that all technology stocks are in a bubble today — just the “story stocks” that have been disconnected from reasonable valuations. Tesla, Shopify, Zoom and Square have all garnered valuations that appear to be quite bubbly. (And I don’t mean in the good way like you want your Coke to be.)

Market bellwethers such as Amazon, Google, and Microsoft aren’t all that expensive when you back out the hordes of cash they have on their balance sheets. They also have accounting that tends to distort the real numbers. For example, all of them invest heavily into research and development, which has to be expensed currently but has nothing to do with the day-to-day running of their core business. These investments for the future are deducted currently under US accounting principles. The resulting lower earnings makes them appear more expensive than they really are.

So what is driving this latest display of herd-like behavior? Part of it is FOMO (fear of missing out). It’s a powerful concept and it goes something like this:

“My brother-in-law made a fortune trading stocks. It can’t be too hard if he can do it.”

In other words, “it really sticks my craw, because he’s not very bright, and he’s making all this money. So I’ll show him and open an options account.” Ugh. This is not a good idea.

Another contributor to this phenomenon is valuation indifferent investors. These are market participants who either: will not, cannot, or choose not to consider valuation as a factor. All the “nots,” while part of the same clan, extend to three different family branches.

The Will-nots: The Will-nots are led by uncle Vanguard and his cousin I-shares from Blackrock. The Will-nots are the largest and most influential of the totally indifferent clan. When stocks go up they not only don’t care, they’re required to buy even more of the overvalued security. Demand sets the price, not fundamentals.

The Cannots: The second group tends to be newest on the scene, but loud and proud. Their domain might be Reddit or a trading app such as the aforementioned Robinhood. They have no advice. No disclosures. No suitability requirements needed. Locked and loaded. Let’s trade. This group thinks that a $100 stock is expensive and a $5 stock is cheap. It’s just not that simple.

The Choose-nots: This group is made of the professionals who have discarded valuation for momentum. It doesn’t matter what you pay, everything is going up. Some believe the Choose-nots don’t know what they’re doing, but in actuality they do. They’re burying the fruits of their labor in the backyard. They know one day it will all come to an end. When it does, they’ll walk off into the sunset. For now, valuation doesn’t matter. The Choose-nots are led by ARK funds and other concept funds. David Portnoy’s Social Media ETF comes to mind — the definition of mindless investing.

Of course, Wall Street supports the entire Not Clan. It knows where its bread is buttered. As the Great Enabler, it provides research materials and slick promos. They didn’t blow the whistle in 1999 and they’re not going to blow the whistle now.

Don’t Trust “the Market” or Those That Do

The Munder Internet fund, the Amerindo Technology fund… these hot funds of 1997-1998 went up 3-6 times only to lose 90% of their value in 1999. All closed shop. Some went into hiding. Some were never heard from again. A couple went to jail.

Yours truly subscribed to Michael Murphy’s Technology Investing, voted #1 newsletter in 1999. Mike told us how technology was changing our lives and how we would profit. I read it faithfully, not really understanding what I’d just read. (Uh, that probably should be a clue that you don’t know what you’re doing.) Then the tech bubble burst and Mike just disappeared. Not only from my mailbox, but from the media. No letter. No phone call. No refund. No nothing. I’m still hurt…

At the time, I was trying to understand new concepts. In the end, I think I understood well enough. I lost no client money and very little of my own. I never could understand how any of these burgeoning new technologies had a competitive advantage and how you could, in turn, put such a high valuation on them. It seemed way too easy and illusory. And like so many things that seem too good to be true, it was. I’m glad I was just trading on paper.

At CSH, we don’t predicate our success on “the market.” Most investment firms give out boilerplate advice such as, “just ride it out” or “it’s not timing the market, but time IN the market that counts.” I don’t really agree with those statements.

We’ve Been Here Before: Herd Behavior and Recovery Time

After the crash of 1929, it took until 1955 for the market to reach the bubble valuations of the late 1920’s. In other words, it took 26 years to get your money back. Markets don’t always go up.

After the stock market reset of 1999, it took a decade to achieve the same level on the Dow.

Valuations and extremes in markets matter. At some point, money-losing companies priced as market leaders, and even good companies trading at high-flying multiples, will reset. Some simply won’t come back. Charles Mackay would say just riding it out is stupid advice, and so would I.

As we enter 2021, CSH is positioned for higher inflation, higher interest rates, and higher oil prices. We have hedges in place. Some take the other side of these market anomalies. Value stocks, which are our specialty, have seen a new emergence after nearly a decade of underperformance. In relation to the rest of the market, many of our top holdings still remain undervalued. High quality insurance stocks are at decade lows. We are excited to turn the page and continue into 2021.

Thanks for continuing to trust CSH with your hard-earned money. I promise we will continue to look out for your best interests. We care about growing and protecting your money just as much as we do ours. You definitely can’t say that about many advisors.