What the Most Savvy Investors Know About the Coming Decade 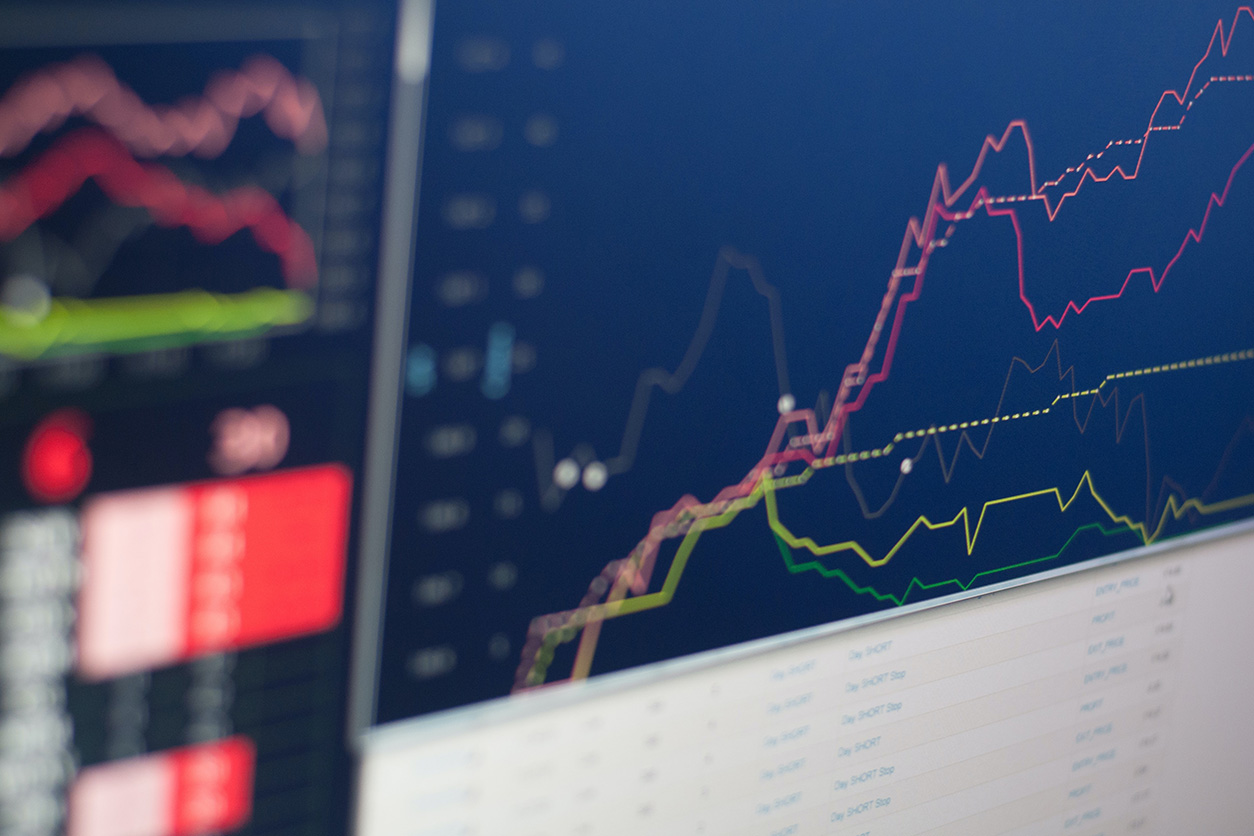 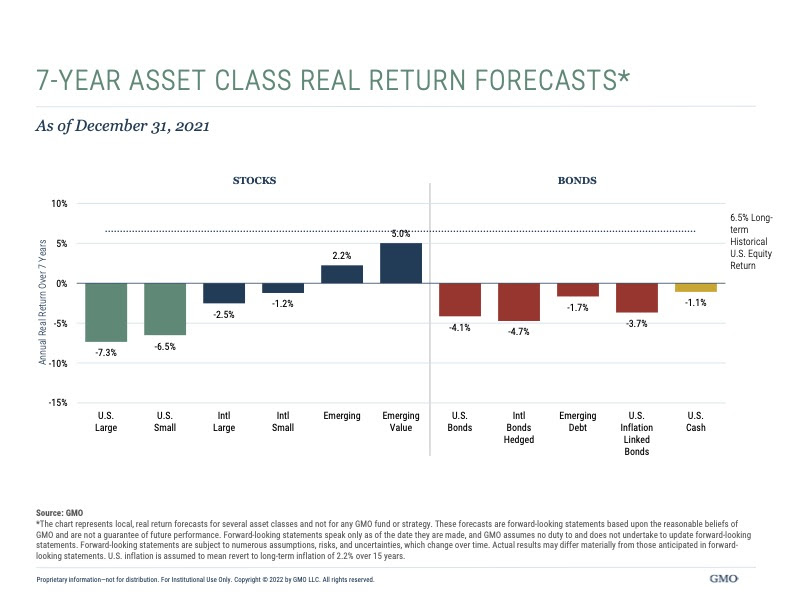 The above chart doesn’t look good, does it?

In fact, it looks like something I wouldn’t want any part of.

The graph is titled “7-year Asset Class Real Return Forecasts.” The left side is the forecasted return on stocks for the next 7 years and the right is the 7-year forecast for bonds. They’re mostly negative.

So, who are these people that they had the audacity to make such a stark prediction?

GMO, the source of the graph, stands for Grantham, Mayo, Otterloo — one of the most respected investment research firms in the world.

GMO is not a traditional or typical Wall Street firm. They’re not trying to sell investments to the masses as most brokerage firms do. They also don’t subscribe to the generic stocks-go-up-over-the-long-haul-so-just-stay-invested philosophy, either. And in my opinion, boilerplate advice like that is totally useless, which is one of the reasons why I’m always doing research and watching groups like GMO.

GMO manages money. Lots of it.

Last I checked, they managed about $63 billion dollars! They work with high-net-worth individuals, institutions, endowments, etc. Not your typical mom-and-pop stock and bond shop. If you’re reading this, they don’t take you as a client. Their job is to protect and build their clients’ net worth over time. And they do a GREAT job of it.

I first became acquainted with them in 1998. GMO printed the exact same chart above for their 10-year stock and bond forecast. The result was quite similar. Negative returns for stocks for the next decade. “Sacrilege,” the market promoters said. “They must be on crack.” “Don’t they know we’re in a bull market?” The S&P was on a tear, advancing nearly 60% over just the prior 3 years. “There’s no way that prediction could be right.”

The salient point here is not that GMO is great at making predictions. It’s that they understand the reversion to the mean. This is an important concept in finance.

What’s Reversion to the Mean and Why Should You Care?

Market gains tend to be cyclical over time. They don’t go up and down in a straight line. Gains tend to lump together and, in fact, stocks can outperform their fundamentals over a period of time. To “mean revert” means they will snap back more in line with their true fundamentals. Great gains can be followed by periods of restoration to normal. The larger the gains, the more violent the snapback. Equilibrium will be reached. This is simply math…

GMO’s chart above shows US large-cap stocks losing 7.3% annually over the next 7 years. Effectively, the S&P 500 will give back 1/2 of all its gains once again. The point here, dear reader, is not whether the loss is 7% or 2% or whatever percent. The point is — are they directionally correct and in the right ballpark with their prediction?

If your fear indicator is going off right now it should. After all, GMO manages money for a living. Investing tends to be a zero-sum game. When someone is winning someone is losing and vice versa. Of course, many of the losses of the early 2000s simply evaporated. Companies went out of business, recapitalized their balance sheets, stocks went away, and came out the other side a brand new entity.

The stock market and bond market are simply wealth transfer vehicles. They’re there to aid companies in raising capital to do business. They raise money through stock issuances, bond issuances, etc. They don’t exist for your benefit. The US stock market is not a machine where you put in money and it spits out 12% on the other side. You’re not entitled to anything.

How Sophisticated Investors Look at Markets

I can tell you through decades of experience that sophisticated investors look at markets through a totally different lens than the other 99%.

They don’t listen to talking heads on TV.

And they don’t react.

They read the research. They understand when a stock is cheap. They follow the profitability of their investments, not the stock prices. They plan ahead.

“They’re just curmudgeons.” “They’ve been in the business too long.” Well if you’ve been around long enough in this business you become an old fogey yourself. I love it, and I’m a curmudgeon now as well — “kids get the hell off my lawn.”

Let’s look at the graph again.

Bonds on the right side look even worse than stocks — all negative returns. Well, dear reader, this is where a decade of interest rate manipulation can lead you. Sitting in a trough of our own making. The right side of the chart can be explained quite simply. Interest rates and bonds enjoy this inverse relationship. Interest rates go up and bonds go down.

The opposite has been the norm for 35 years. GMO obviously thinks that interest rates can go up from here. Probably for a long time. If that’s the case, it doesn’t take a genius to know what you shouldn’t own. It’s like a semi-truck coming at you at 80 mph. You don’t measure how far you need to move. You simply get out of the way. If the highest return category for an investment is cash, it should make you think this isn’t normal.

If you’re completely distressed now, don’t be. The wealth transfer vehicle called the US stock market will do its thing. And that thing is to transfer wealth from the unprepared to the prepared.

As a small investor, there’s no reason to be a victim.

The research above doesn’t reside on an island by itself. Research Affiliates has posted a similar study on its website. It’s slightly more upbeat with stocks only losing 4% a year for the next ten years and emerging markets enjoying a 10-11% annual return.

At CSH Investment Management we believe the graph to be directionally correct. And much of the world’s smart money seems to believe this as well. It’s a matter of how long it will take. But the time element is unknowable.

We lived and managed money during the early 2000s — a lost decade for most.

Have you ever wondered during times of distress who’s on the other side of that transaction? We all know the losers. We work with them. We might even be one of them. But there are also winners. You just don’t hear about them because it’s insensitive to bring up.

So, do you sell everything and run for the hills? With inflation eating up a good chunk of your portfolio every year, that doesn’t seem prudent, does it?

Remember the old movie, “The Candidate” with Robert Redford? Redford was running for the US Senate in California. His opponent was the old guard and he was the anti-establishment candidate. His slogan was, “There’s a better way with McKay.”

At CSH, we are the anti-establishment investment team.

You’re not going to find these answers at Edward Jones. You won’t wander across it via the internet. The big brokerage firms have too many conflicts of interest to change the way they do things. Alternative views are looked at with derision and laughter.

We believe there is indeed a better way.

If you enjoyed my missive today, stay tuned for my next installment — how to protect your portfolio and prosper over the next decade. It’s coming soon!

In the meantime, we are always available to chat with you about any questions or concerns that you have. Contact us on our website or give us a call at 217-824-4211.